The most important tourist attractions in Istanbul 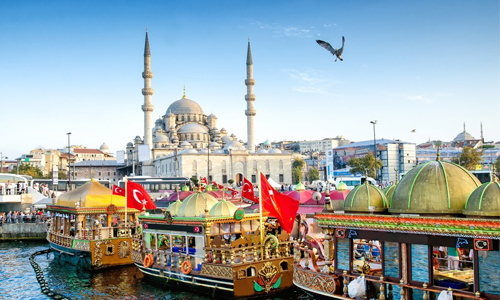 Istanbul is one of the largest cities in the world, which has been the object of covetousness from different empires over the centuries.

Constantinople was the capital of the Great Byzantium Empire and it remained after the Eight Conquest of the city and its name was officially changed to Istanbul after the establishment of the Turkish Republic.

The city has many valuable and distinctive attractions, perhaps the most important of which are Hagia Sophia, Tobi Qubay Palace, Blue Mosque and the Grand Bazaar, where there are many wonderful things that you can do in all areas of the city, even the most remote ones.

We will learn about the most important tourist attractions in the city with a brief overview:

The Hagia Sophia remained one of the most famous landmarks in Istanbul despite its multiple transformations throughout history. It was a church, then it was converted into a mosque and in the twentieth century it became a museum.

The palace was first built in the fifteenth century by Sultan Mehmed the Conqueror and is a dazzling display of Islamic architecture with grand and luxurious squares interspersed with intricate hand-painted tile work that connects a group of luxuriously decorated rooms all surrounded by walls and towers.

The palace was built for the first time by Sultan Mehmed the Conqueror in the fifteenth century and was considered the seat of the Ottoman sultans. It is distinguished by its distinctive Islamic architecture and luxurious squares lined with intricate hand-painted tile work.
You can wander through the Imperial Council Hall and the Sultan's private room, and you will need at least half an hour to fully see the Topkapi Palace.

This beautiful mosque was an architectural gift from Sultan Ahmed I to his capital, which is known as the Blue Mosque today. It took 7 years to build the mosque between 1609 and 1616, and it contained six minarets, the same number of minarets of the Grand Mosque in Mecca, which caused a stir throughout the Islamic world, and in the end, a seventh minaret was donated to the Grand Mosque to stop dissent.

Tens of thousands of decorative Iznik tiles ensure that the mosque has its nickname, the Blue Mosque. The spatial effect and the entire interior color make the mosque one of the best achievements of Ottoman architecture.

Just behind the Blue Mosque is the Arasta Bazaar which is a great place for shopping as the handicraft shops here sell quality souvenirs. Even if you are not interested in wandering around, you can head here to see the Great Palace Mosaic Museum, located between Arasta Bazaar and the mosque. This small museum displays part of the 250 square meters of mosaic pavement that was unearthed in the 1950s here.

one of the most surprising tourist areas in Istanbul. This huge palace-like hall, supported by 336 columns in 12 rows, once stored the imperial water supply for the Byzantine emperors. The project was started by Constantine the Great but ended by Emperor Justinian in the 6th century.

The ancient Hippodrome began in the year 203 and was the center of Byzantine public life and a scene of wonderful games, chariot races and conflicts between factions. Today there is not much of the hippodrome left to view, except for a small portion of the walls on the south side, but in the square there is now a wide variety of monuments.

On the northwest side there is a fountain, presented by German Emperor William II to the Ottoman Sultan in 1898. To the southwest, there are three ancient monuments: an Egyptian obelisk with a height of 20 meters, the serpent column that was brought from Delphi; A stone obelisk was originally covered with bronze gilding.

It is located a short distance from Topkapı Palace, and it brings together an amazing collection of artifacts from Turkey and all over the Middle East, which form a wide series of the history of this region. There are three separate sections in the museum, each of which is worth a visit: The Museum of the Ancient Orient; The main archeology museum; And the pavilion of the decorated tiles of Muhammad Al-Fateh, which holds an amazing collection of ceramic art. In addition to all the wonderful artifacts on display, don't miss the Istanbul During the Exciting Ages exhibition at the Main Archeology Museum.

Sightseeing in Istanbul is all about shopping for many visitors, and the Grand Bazaar is where everyone comes to. This huge covered market is basically the first mall in the world, occupying a quarter of the city, surrounded by thick walls, between the Nur al-Ottoman Mosque and the Beyazıt Mosque.
The entrance to the bazaar is one of the 11 gates covered by a maze of domed ceiling, lined on both sides of shops and stalls selling all the Turkish souvenirs and handicrafts.

Suleiman the Magnificent Mosque is on the top of a hill in the Sultanahmet district, and it is one of the most famous landmarks in Istanbul. The height of the dome that dominates the interior is about 53 meters, as it is characterized by its harmonious dimensions and unity of design. Outside the quiet garden district is an impressive Ottoman cemetery that also includes the tombs of Sultan Suleiman and his wife.

The Spice Market is the place to get Turkish delight sweets, dried fruits, nuts, herbs and spices. This market is one of the most popular activities to do in Istanbul.

The construction of this palace shows the great and clear influence of European decoration and architecture on the Ottoman Empire in the 19th century.
It was built by Sultan Abdul Majid I in 1845 and replaced the Topkapi Palace as the main residence of the sultans of the Ottoman Empire.